location | The Happiest Place on Earth

Eli and Sergio met in church.  One day, this guy came up to Eli and introduced himself.  In a few weeks, they quickly became good friends.  Then, they became best friends.

Neither of them were looking for a relationship, let alone with one another.  But Sergio quickly became someone Eli could trust and believe in.  In 5 months, they were dating.

In Christmas 2008, Eli’s sister pulled her out of her room asked her to sit in a chair where she was surrounded by her family in the living room.  One sister brought out what Eli called a “GINORMOUS box”.  The other sister brought out a video camera and filmed her.  A card is handed to her from Sergio apologizing that he couldn’t come this Christmas to be with her but that the video camera was to record her expression when she opens the gift.

She began to open the box.  Found another inside. Opened that one. Another. Another. Another.  Each box had a riddle, a statement, a question.  When she finally got down to the ring box, she found a piece of paper with a note.  Then, everyone was silent for 30 seconds…because Sergio was supposed to have popped in right there.  But Eli opened the gifts too quickly.  One cousin yelled out to look around because maybe something had fallen off.

Finally, Sergio runs in, grabs her hand, and has her stand up.  He then shared that he had asked her parents for her hand in marriage and that their only condition was that she needed to accept.  He got down on one knee and asked her to marry him.  Her entire family around her yelled, “OHHH MY GODDD!!!”  Apparently, only her sister and parents knew so it was a surprise for everyone.

She couldn’t even talk through the tears that flowed down.  All she could do was excitedly nod her head as her way to say, “yes”.

Sergio and Eli’s first date was at Disneyland.  When we heard that we would be having their engagement session at Disneyland, we were absolutely thrilled!  This had been a shoot we had been wanting ever since we became wedding photographers.

We went with the right people.  It was an amazing time.

View more photos from this beautiful e-session below:

Now, it’s always important to make sure you can be relaxed around your wedding photographers.  We always encourage couples to let themselves play around during a shoot.  Normally, you see the very romantic side of a couple during their engagement shoot.  We thought it might be fun to share the behind-the-scenes side of our shoots.

You get very up close and personal to get the great shots.  Another reason why you better love and feel comfortable with your wedding photographers!

And, you know, be prepared for things like too much spinning…

(Disclaimer: This is a posed shot they wanted.  They weren’t really sick.  We wouldn’t do that to you.)

Ok, who hasn’t gone past this area and not wanted to dress up as Indiana Jones?

…stuffing a large spider in the face of the one you love.

Eli and Sergio, thank you for an awesome time.  We cannot wait to see you become husband and wife! 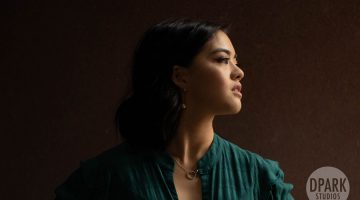