Michelle and Selvin both attended bboy practices in a North Hollywood community center and danced alongside each other for two years before even speaking to one another. Then one day, Michelle began to attend a Northridge kung fu studio to learn tricking. She brought her moves back to the center only to see Selvin execute the spin kick trick she had been trying to learn! After asking him to teach her, the two decided to train together at a Hollywood gymnastics studio. Eventually the two were having lunch and exploring L.A. together. Selvin asked Michelle out on a date and the rest is history.

Selvin wanted to do the proposal right, and so during a New Year’s trip to Florida he officially asked Michelle’s parents for permission to marry her like a modern day gentleman.

Selvin proposed to Michelle in the comfort of their apartment, after a day of organizing and rearranging furniture. Though the room was dark, Selvin had purchased a ring box that was lit by strong LED lights. When Selvin proposed, Michelle lit up as well, and they were officially engaged.

Selvin and Michelle celebrated their love and their cultures at their lush, intimate wedding.

Michelle and her bridal party prepared for the big day at the beautiful Sheraton Universal hotel in Hollywood.

The bridal party, helping the bride step into her dress!

The lush, ethereal bridesmaid’s dresses were unique to each girl!

The whole bridal party had beautiful white bouquets prepared by The Enchanted Florist.

The bride and groom had an exciting first look.  She rode down the escalator to a provide hallway for the two of them.  It was so sweet to see their faces once they saw each other.

Michelle and Selvin made a very charming couple. So in love!

The wedding party was absolutely fierce and fabulous.

The ceremony and reception were held at Ramsey’s at the Club, close to Warner Bros. Studios.

Even bigger smiles for the bride and groom. Their ceremony was all elegance!

The bride and groom also held a traditional paebaek ceremony.

Love the bright colors and the blending of cultures in this beautiful Korean paebek ceremony.

The couple opted to decorate the cermony space with simple but eye-catching palm leaves.

Even their adorable cakes made by Mini Baker were decorated with palms!

The ceremony was sweet and elegant

And the dancing, of course, was a hit with the guests!

Congratulations, Selvin and Michelle! You guys make an absolutely beautiful couple, and your wedding was wonderful. Thank you for letting us be part of your day! May your love for each other grow more and more everyday. 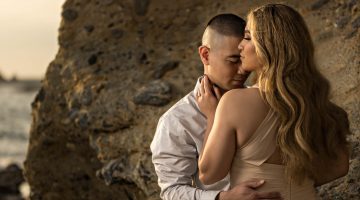